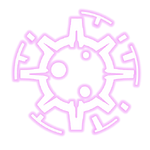 Chaotic Timekeeper
Add a photo to this gallery

Sin is a sadist who enjoys spilling the blood of her enemies, especially those from Schicksal. She thinks very highly of herself and doesn't like competition from others.

Following the incident in which she entirely burned her adoptive parents' house, she was then adopted by Cocolia as part of the X-10 Experiment, where she was selected as a candidate. As Bronya was also taking part, Sin became jealous and shoved her down a stairway, damaging her legs.

Seele Vollerei had seen the altercation but was helpless to stop her. She was determined to confront Sin, who mocked and abused her for being weak and helpless. Seele's stigmata then possessed her, shocking Sin as she did not expect such power from her. Seele then plucked one of Sin's teeth before subjecting her to the same treatment she had done to Bronya, which caused Sin to lose consciousness.

Despite not taking part in the X-10 experiment, Sin would continue to serve Anti-Entropy.

Sin was tasked with finding the legendary Xuanyan sword, previously used by Jixuanyuan against the Houkai. She traced Schicksal's squad (Himeko, Kiana, Mei and Bronya) to an underground cavern and ambushed them with the mechas she had been given with.

While the squad managed to escape the trap and headed outside, Sin confronted them with even more mechas. However, Chiyou arrived and consumed both groups. Sin survived and rallied the remaining mechas, encountering her enemies again and attempted to attack them. Bronya stopped Sin and stated that they should work together to stop Chiyou, and told her one of her secrets. As they reached Chiyou's core, Sin became nervous and tried to take the mechas back with her, but Bronya had already hacked them. Sin left the group, not wanting to walk into "certain death" and would later be extracted from Chiyou's body.

She also participated in the "Schicksal Intrusion Operation" initiated by Theresa, appeared in the third airport suppression battle, and controlled the Titan of Flame against the zombies in the airport.

Retrieved from "https://houkai3rd.fandom.com/wiki/Sin_Mal?oldid=10592"
Community content is available under CC-BY-SA unless otherwise noted.