Before Cecilia Schariac, Reanna Brigantia held the title of the most powerful valkyrja ever in Schicksal. Reanna is presumably an S-Rank, considering her former title. She wielded the Shadow Orchid before it was given to Cecilia, and then to Durandal after the former's death. She died in an attempt to stop Otto's Honkai nuke from destroying her friends as well as the entire New York.

Unlike Durandal or Cecilia, Reanna achieved power after getting her own flesh replaced with Soulium through Otto's experiment. This made her a complete cyborg, granting her many advantages like nearly ignore Houkai erosion and increased combat performance but at the risk of having her body controlled by Otto. 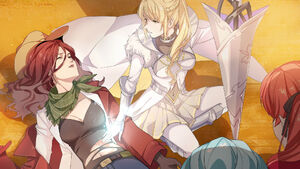 "I am black from the abyss, I am from the white of the sky.

Before the birth of the world, I existed after the annihilation. I want to give the water of the life to the thirsty person.

Reanna used this skill to save a girl who was seriously injured and on the verge of dying. 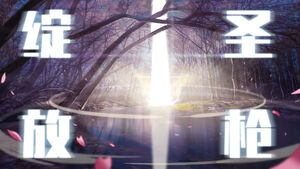 "Ich bin das Schwarz auch das Weiβ,Vor dem Beginn und zwar nach der Ende (I am the black also the white, before the beginning and after the end.)

I am the black that devours everything. I am the white that gave birth to everything.

Before the birth of the world, I existed after the annihilation. 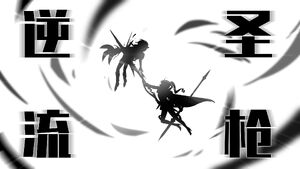 "I am black from hell, I am white from heaven.

Retrieved from "https://houkai3rd.fandom.com/wiki/Reanna_Brigantia?oldid=9788"
Community content is available under CC-BY-SA unless otherwise noted.