Otto Apocalypse was born in the 15th century and was the youngest son of the Bishop of Destiny, the young master of the Apocalypse family.

Young Otto was frail and couldn't become a good soldier. However, his cleverness and dream of becoming the greatest scientist soon led him to focus on enhancing weapons and protection against Honkai Energy. At this point, Otto still believed much in normal science.

When Kallen's father, who had been believed to be as strong as a god by Otto, died, Otto attempted to seek help from a Golden Cube that still remained sealed without any way to open. His intention was to find a solution that could relieve Kallen's sorrow, caused by the death of her father.

Upon touching it, Otto immediately opened it due to his natural intelligence and released The 1st Old World Herrscher. This Herrscher, without much hatred for humanity up to that point, agreed to live within him as well as granted him its power in return.

With the new power and 1st Herrscher's suggestion, Otto attempted to kill himself to trade his life for Kallen's father's one. However, Kallen did not let him do that.

In 1470, The Black Death, a Honkai disaster, occured. It took him nearly 5 years to find an antitode that negated the effect of the desease. The first person saved by this vaccine, Eleanor, later joined Schicksal and was gifted the family name Schariac by him.

In 1475, during the retreat of Schicksal after losing to Fu Hua, Kallen and Otto saved a girl in Geneva. This girl, Vera (Named by both of them), later developed a deep admiration for him and tried her best to serve Schicksal as well as she could. While she could not become a Valkyrie, under Otto's caring, Vera managed to become the Leader of The Bishop's Bodyguards.

In 1476 or perhaps earlier, Otto grew an interest in Honkai. He believed that The Black Cube, if understood clearly, could be the key to defeat Honkai. Supported by his father, Otto began to perform eperiments on human for a few reasons in order to better understanding the Cube. However, his progression was cut short by Kallen, who found out about his experiments and later understood how Schicksal and Otto had misunderstood The Cube, which in turn escaped Schicksal with the Cube.

Left with Eleanor's dead body (Honkaified by the 12nd Herrscher's Core inside the Cube, and killed by Otto when she tried to kill Kallen off guard), Otto tried to use her body to create an anti Honkai antitode but his attempt failed completele. This led him to believe that normal science could not beat Honkai. The turning point happened when The 1st Old World Herrscher introduced him with Void Wanzang, the 1st God Key and made a trade with him, in which Otto trade his control over his own body for the God Key. Somehow, Otto own the God Key without losing his body. It is believed that this event led him to focus much more on Honkai, now believed that Honkai could defeat Honkai, if exploited it correctly. At that time, this belief and the whole Honkai research were still considered to be a taboo, which forced him to do that in secret.

In 1543, Vera, passed out peacefully in her sleep. Due to her great contribution for as well as her love for him (Recognised bt Otto), Otto gifted her a new name: Ottovera.

Otto’s social rhetoric is mostly disguised, but his feelings for the childhood sweetheart, Kallen Kaslana, are genuine. Kallen is one of the few friends in Otto’s lonely childhood. After learning about Otto’s research, the kind Kallen didn't show any prejudice or fear; instead, she expressed understanding about him.

For Otto, this kind of recognition is something he never got from others, and it is also proof that Kallen is different. So this friendship become Otto's one-way love for Kallen.

After growing up, Otto often used the power of the Apocalypse family to secretly assist Kallen, and for Kallen's request, he would be regarded as a more important mission than his own life. On one occasion, Kallen asked Otto to help her to go to Italy to find a certain target. When the two arived at the destination, Kallen was surprised to find that Otto was wearing women outfit.

Even if Kallen stole the Houkai box and was attacked by the Destiny, Otto didn't forget to bring the Judah's Oath to her and also expressed his willingness to plead with Kallen before the bishop.

In order to save Kallen, Otto even released Houkai beasts in the underground of the Church of the Destiny. However, it was self-defeating. In order to evacuate the civilians, Kallen refused to escape with Otto and was seriously injured by the Houkai beast. She died later in 1477. 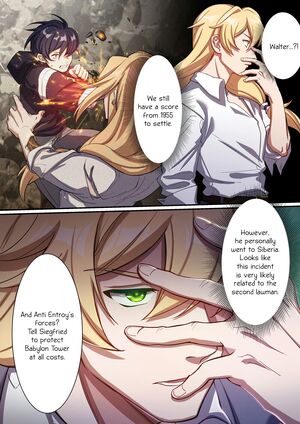 The Otto in the 21st century before the fight with the 1st Herrscher (Welt Joyce) isn't the real Otto body but the machinery one. This Soulium body originally belonged to Reanna.

Retrieved from "https://houkai3rd.fandom.com/wiki/Otto_Apocalypse?oldid=7202"
Community content is available under CC-BY-SA unless otherwise noted.