The Fire Moth was an organization of the Old World that has been wiped out prior to the current civilization. Its purpose was to serve and protect the last of Humanity but failed and was wiped out by the final (14th) Herrscher of the era.

After the 14th Herrscher destroyed most of the human population

The Fire Moth (long name: THE MOTH WHO CH△SE THE FL△MES)  was a rebel organization located in Nagazora City, which was founded by human beings in the Old World. The mission of this organization was to protect people and eliminate Houkai threats.

However, when the 14th Herrscher destroyed the Old World, this organization was also wiped out. 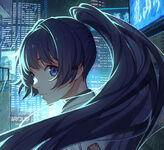 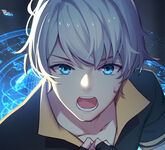 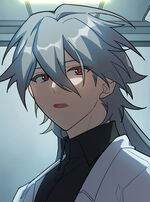 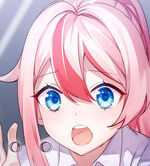 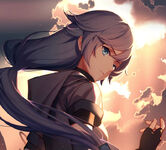 MSA-209 HUA
Add a photo to this gallery

Sacred Relics are a series of mass-produced weapons driven by materials similar to the Herrscher core, with a unified design style. In Schicksal organization, many Sacred Relic weapons have been unearthed in many places such as Baikal. The holy relic weapons currently available in Houkai 3rd are as follows:

When the organization discovered that the 7th Herscherr was too strong against any normal human, Professor Mei started the Soldier project in order to improve human strength by fusing the human body with the DNA of Houkai beasts. These soldier were called "Fusion Warriors" or MANTIS (Massively Augmented Neo-Tech Integrated Soldier)

Currently only appears in visual novels.

According to its own description, it is a super weapon built by the pre-civilization era. The author personally speculates that it was an experimental weapon that the pre-civilization tried to achieve the same destructive effect as the God Key without using the core of Herrscher. Although it is also made of Soulium, it differs from the God Key in that it is powered by 7 "gems" with different sub-functions, and can only exert its full power when all 7 gems are attached to the sword. One of the gems is AI with self-awareness. Each gems has its own unique use when it is independent of the sword. The complete weapon can cut the space itself, causing unavoidable damage. After being made, it fell into a sleep state.

Mei and Prometheus A.I. created this project in order to make God Key weapons, and use it against Houkai. Eleven powerful God Keys were made in total before the organization was wiped out. However, only 7 out of 11 God Key weapons were found as of today.

This is the last project created by Professor Mei to implant stigmata to the human body. Mei knew that the 14th Herrscher would later destroy their civilization, so she left and preserved a batch of girls called the Seed of Revenge which Fuxi, Nuwa, and Fu Hua was included in, with stigmata implants with the goal of guiding and protecting the next generations to come.

An Ark of retained knowledge bearing a copy of human genome library. the Ark was launched to seek other habitable planet for humanity.

A Valuka is to perform analysis of a myriad universes within the Seed of Sumeru.

The task is to finding the perfect solution to defeat the Houkai.

An Emergency Mass Backup, Evacuation, and Revival plan. The responsible "Pioneers" were to pass knowledge and technology to the surviving humans who would rebuild civilization.

Project: Regulator was designed to stop KEVIN in case he strays from the right path...

The actual function of this project is still unknown, maybe it caused KEVIN to get trapped in Sea of Quanta...

Unknown use of this project...

Retrieved from "https://houkai3rd.fandom.com/wiki/Fire_Moth?oldid=11242"
Community content is available under CC-BY-SA unless otherwise noted.